After the Chicago Fire, many of the city’s Swedes moved to this area on the North Side to rebuild their lives. It’s believed that the neighborhood is named after Reverend Paul Andersen Norland, who was integral in attracting folks to join the community during its early years (neighborhood’s pros: not engulfed in flames).

Andersonville’s roots as a community extend well back into the 19th century, when immigrant Swedish farmers started moving north into what was then a distant suburb of Chicago. In the 1850’s the area north of Foster and east of Clark was a large cherry orchard, and families had only begun to move into the fringes of what is now Andersonville. The neighborhood’s first school, the Andersonville School, was built in 1854 at the corner of those two thoroughfares, and served as the area’s primary school until 1908.

After the Great Chicago Fire of 1871, wooden homes were outlawed in Chicago. Swedish immigrants, who could not afford to build homes of stone or brick, began to move outside of the city’s northern limits. Swedish immigrants continued to arrive in Andersonville through the beginning of the 20th century, settling in the newly built homes surrounding Clark Street. Before long, the entire commercial strip was dominated by Swedish businesses, from delis to hardware stores, shoe stores to blacksmiths, and bakeries to realty companies. The local churches, such as Ebenezer Lutheran Church, Bethany Methodist Episcopal Church, First Evangelical Free Church, and St. Gregory’s Roman Catholic Church, were also built by Swedes, and reflected the religious diversity of the new arrivals.

Like most other European-American ethnic groups, Swedes began to move to the suburbs during the Depression and post-war periods, and the neighborhood began to decline. Concerned about the deteriorating commercial situation, the Uptown Clark Street Business Association renewed its commitment to its Swedish heritage by renaming itself the Andersonville Chamber of Commerce. On October 17, 1964, Andersonville was rededicated in a ceremony attended by Chicago Mayor Richard J. Daley and Illinois Governor Otto Kerner. The following summer, the annual Swedish tradition of celebrating the summer solstice blossomed into Midsommarfest, which has since grown into one of Chicago’s largest and most popular street festivals. 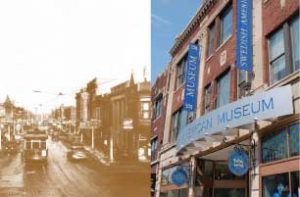 While some of the Swedish-owned businesses gave way to stores and restaurants owned by Koreans, Lebanese, and Mexicans, many remained in Andersonville, serving the remaining second and third-generation Swedes as well as the new arrivals to the neighborhood. The Swedish American Museum was founded in 1976, by Kurt Mathiasson, as a grassroots effort to preserve and disseminate the history of the great contributions of early Swedish immigrants to Chicago. The Museum was opened to the public in a ceremony attended by King Carl XVI Gustaf of Sweden, who returned in 1988 to dedicate new and larger quarters at 5211 North Clark Street. The Museum has since undergone several phases of growth, including the 2001 addition of the Brunk Children’s Museum of Immigration and the 2009 renovation of the lobby and façade.

In the late 1980s, Andersonville began a period of revival as new groups discovered its lovely housing stock, easy access to downtown Chicago and the lakefront, and unique commercial district. A large lesbian and gay population developed, spurred by the opening of such businesses as Women & Children First, a bookstore focusing on feminist authors and topics. New gift shops and ethnic eateries opened and gave Clark Street a new commercial vitality and diversity. 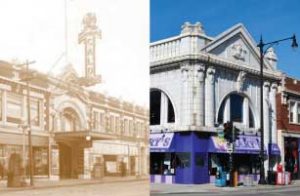 Today, Andersonville is comprised almost entirely of unique, locally owned, independent businesses. The vast majority of Andersonville merchants have ties in the community beyond the walls of their business. They may live in or near to the neighborhood, serve on community committees or boards, or provide funds, goods, and time to local charities. Andersonville has become a magnet for all kinds of families. There is a strong sense of unity in the neighborhood, a friendliness that has led more than one observer to note, “It’s sort of like Mayberry!”

Andersonville remains one of the most concentrated areas of Swedish heritage in the United States, but its residents and businesses represent a wide array of cultures. In March, 2010, the Andersonville business area was named a National Historic District because of its rich cultural and architectural history. 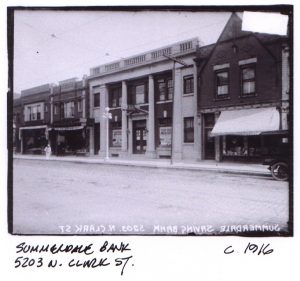 The Historic Andersonville commercial district, along Clark Street and Ashland Avenue, is comprised mostly of early twentieth-century commercial architecture. Included in the historically significant buildings are a number of two- and three-story commercial brick buildings with limestone ornamentation. One of the best examples is the Temple Theater building, located at 5233 North Clark Street – now home to Women & Children First Books. A two story brick building with limestone ornamentation with string courses and geometric patterns, this building is a typical example of an Andersonville commercial structure.

You can take a self-guided tour of “Historic Andersonville!” This historic tour map and tour handout will take you on a 20-minute walking tour of historically significant buildings throughout the commercial area. Remember to stop, shop, and eat too!