If you’re buying a home in the Chicagoland area, get it tested for radon. There are two main reasons to test for 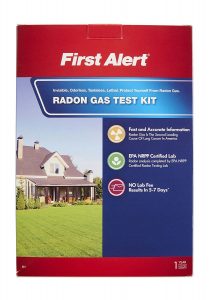 radon; lung cancer and money.
Our radon testing services are designed for real estate transactions; we give quick turnaround with 48-hour testing, we use continuous electronic monitors that give an hour-by-hour breakdown of the test results, our technicians are licensed by IEMA (Illinois Environmental Management Agency), we’re an independent third party, etc. If you’re interested in having your own home tested, your best option is to purchased a Do-It-Yourself test kit. We recommend long-term test kits for the most accurate results. We don’t sell them, but if you click on the picture on the right, you can order your own.

A Few Quick Facts About Radon

Radon gas is the number one cause of lung cancer among non-smokers, and the second leading cause of cancer in America. Radon testing is recommended by the EPA, the Surgeon General, the American Lung Association, and the Illinois Department of Public Health. The area most at risk in a home is the lowest level that gets lived in.

When we conduct a radon test and the test results come up high, the buyer typically asks the seller to pay for or install a radon mitigation system. These systems are extremely effective at lowering radon levels, and they typically cost well under $1500. If you buy a home and you decide not to test for radon as part of the home purchase, you can still test for radon after you own the home, but if a radon mitigation system needs to be installed, you won’t have the luxury of asking someone else to pay for it.

Picture this scenario: you buy a home, but don’t have it tested for radon. Several years down the road, you sell your house. The new buyers have a radon test performed, the radon test comes up high, so the buyers ask you to install or pay for a mitigation system. You’ll probably wonder why you never tested for radon when you bought the house. This happens a lot.

We hear many objections to radon testing – some are valid, some aren’t.

The home doesn’t have a basement. Ok, that’s a good objection. We’ve found that most homes without basements have very low levels of radon. Basements with a walkout generally have lower levels, but we’ve still found our share of high radon tests at basements with walkouts.

It’s new construction. Most cities, villages, and towns in the Chicagoland area require a passive radon mitigation system installed in every new house; this doesn’t mean radon will be eliminated, it just means the chances for elevated radon levels will be reduced.

I’m buying a bank owned property or short sale. It doesn’t matter if the house has high radon levels. The sellers won’t be paying to fix it, and I’ll still want the house either way. Fair enough. It’s still a good idea to get a do-it-yourself test after you own the house though.

I’m going to do my own test. That’s fine, but it won’t be part of the real estate transaction.

Radon is a conspiracy of the government. Oh boy. We’ve heard this before, and we’re not going to get into that discussion… but just for the sake of argument, let’s say radon is a conspiracy. Who cares? Even if radon was only a perceived health problem, it would still be a liability.

We’ve put together a ton of information about radon and radon testing in Minnesota. Click on any of the links below for more information.

If you want to add a radon test to your inspection, start the process here