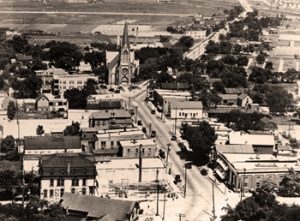 In the early 1800s, the area that became Skokie was a land of swamps and forests, a place where buffalo, wildcat, fox, and deer were plentiful. From those early beginnings rose the Village of Skokie that today is a culturally diverse and economically progressive community. Skokie’s history is rich with influences of the American Indian, French and British explorers, and the emigration of European settlers.

Founding father Henry Harms was a Prussian immigrant who became Skokie’s first merchant, first postmaster, and founder of three Niles Township school districts. By 1869, Harms had built his third and final home. In 1999 the Skokie Park District purchased the home.

In the early 1900s, Skokie was known for its vegetable farms, greenhouses and saloons and two important developments took place that was a sure sign of stability and growth. In 1903 the Chicago & North Western Railroad made it possible for residents to travel to Chicago and the Village’s first bank opened in 1907. Transportation advancements continued in 1933 with the installation of the first paved concrete road in Cook County, outside of Chicago, on what is now Church Street.

Skokie’s population grew so rapidly that at one point Skokie was established as “The World’s Largest Village.” A real estate boom ensued until the Great Depression. It is a testament to the great strength of area residents that new churches were established, that civic organizations started that still exist today and that the education system grew even in the face of tough economic times. The same strength was evident after World War II when Skokie’s single-family home development flourished as the population doubled between 1940 and 1950.

It is from these roots that Skokie has grown and prospered. Skokie’s population approximately 64,784 people continue to embrace the past and enjoy their vibrant community of today while still envisioning a dynamic future for the community.